The US-Turkey Safe Zone Agreement
What Does It Mean?

Sabiha from PODEM contextualized the recent US-Turkey deal and outlined the Turkish perspective on the regional conflict and turmoil. After the July 20th Suruc bombing, Turkey felt the need to take a more active role in the coalition efforts to combat ISIL and allowed the US access to Incirlik air base. Turkey has realized the importance of pushing back ISIL and now believes that, for this to happen, they must be able to assert some sort of control over Northern Syria. Despite the civil war in Syria initially being viewed as one of Syria’s “domestic issues”, Turkey now has three main concerns. Firstly, Turkey worries about its border security. Secondly, Turkey has obvious concerns about the refugee issue given the large numbers of displaced Syrians that are crossing their borders on a daily basis. Finally, this Syrian conflict has had profound implications on their own peace process with the Kurds and the PKK. This last consideration has led Turkey to the realization that this is not just a Turkish issue but is an international one. As Senyucel said, you “cannot discuss the PKK and PYD without US relations, ISIL and domestic issues in Syria”. She stressed that the safe-zone agreement should not be seen as a “honeymoon between Turkey and the US.” 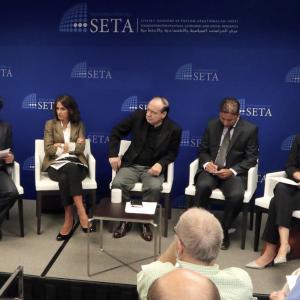